This afternoon we arrived in Labrador.

But let me back up bit.

It’s September 27th, and we had our first taste of…snow! It is cold and we were pretty high up but I thought it was rain blowing in sheets across the mountains. Wishful thinking! 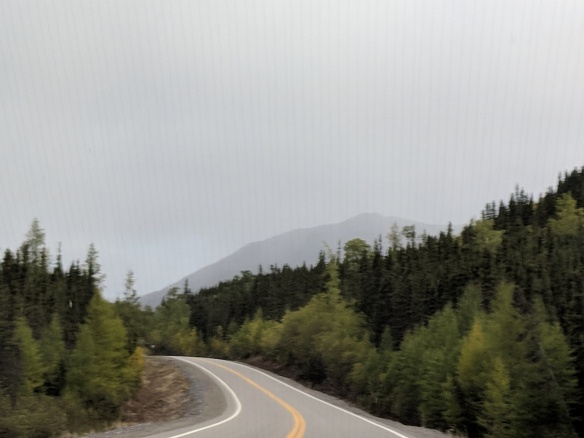 The next surprise was a spot where the road split into a divided highway with a grass-filled median, a sidewalk along one side, and openings for driveways…but no houses. In fact, no buildings at all.

This was the site of the former town of Gagnon. It was a bustling mining town of 4000 between 1959 and 1985. It had a school, churches, a hospital, stores, a mall, an arena, a curling rink, an airport and much more. And then the mine closed, all the jobs were lost, people moved away, and the entire town – all of the buildings – was demolished. All that is left now is a flag and three memorial plaques beside the river.

It was a stark reminder that nothing is permanent.

When we reached Fire Lake, another mining area, the road changed from paved to the same slippery muddy clay we had experienced a few days earlier. This time I was whiteknuckling it as we curved up and down, across railway tracks (11 crossings on the same road!) and came way too close to washed-out ditches for my nerves.

I’m sure many of the truck drivers who saw us today were shaking their heads at the sight of a Mini navigating these roads!

I wasn’t prepared for the magnitude of the mines here. Photos do not capture the size, or the layer upon layer of tailings.

We eventually made it to Fermont, another  community built around mining. 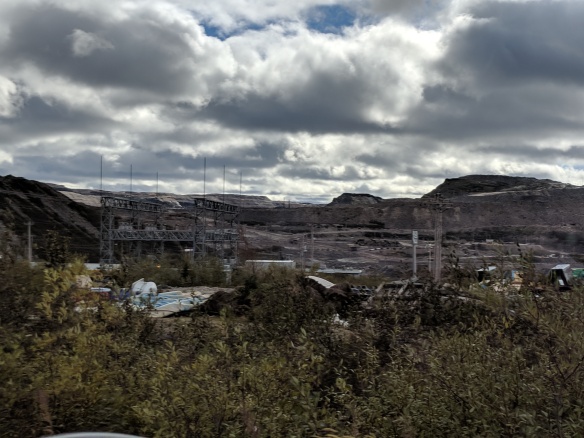 The town of Fermont is known for The Wall. The Wall integrates shopping centres, apartments, schools, a library, cinema, daycare and a sportsplex so that people never have to go outside in the winter.

You have to look closely in this photo, but you can see the long line of red, brown and white building joined together to create a solid “wall”.

And tonight we’re in Labrador City. We entered a new time zone when we crossed into this province (one hour ahead), and the language changed from French to English.

We headed out for a lovely walk around Tanya Lake, savouring the sunshine, although the wind was strong and cold.

Tomorrow, Churchill Falls as we continue the journey north and east.